City and developers come to partnership agreement for Gateway Village 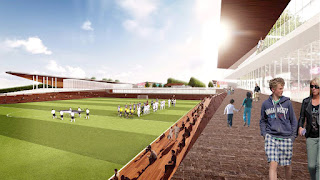 With last month’s $8 million infrastructure ask of the City of Grandview from PG, LLC, developers of Gateway Village, left on the table, an agreement has been reached.

“We’ve talked at length about this being a partnership and I think we’re at a point now where we can say that we do have a partnership and we are working together to accomplish a phenomenal goal of building a world-class soccer/mixed-use facility here in Grandview,” said Deron Cherry, developer.

According to Grandview Mayor Leonard Jones, the city and Gateway Village developers are coming to an understanding of potential costs or risks that may be associated with a development of this magnitude. The $250-300 million project, upon completion, will bring in an estimated 1.8-2 million visitors each year for the soccer facilities alone. Adding in the other amenities such as retail, hotels,
restaurants and other mixed-use, Cherry said the number of visitors will definitely be higher.

“From a city perspective, we have a much better understanding of what the Gateway Village complex is going to look and feel like based on the last six or eight months of negotiations with our partners,” said Grandview Mayor Leonard Jones. “This is the very beginning of what is happening in the Grandview and the surrounding metropolitan area that will have a long-lasting legacy for many, many years to come.”

“The fact that the city is willing to invest in the project makes it a lot better for all of our partners involved to know that the city is in on this deal,” said Cherry. “I think it’s important for people to understand that the investment from the city could be recouped down the road.”

Residents of the City of Grandview will see other benefits beyond having the development along the 150 Highway corridor. Part of the agreement includes that any Grandview resident who wishes to participate in recreational soccer, youth or adult, at Gateway Village, will be able to do so at a 75% or more discounted rate.

“Gateway wants Grandview to be very strong participants in the soccer program,” said Jones. “It’ll be right here in our city and they want to draw from the youth here in Grandview to the point that they are willing to discount that participation rate. That shows, to me, that the developer wants to invest and be a very good partner with the City of Grandview.”

“We’ve always believed in giving back to the community,” said Cherry. “It’s so important and we look forward to doing that.”

The city’s contribution will enhance the developer’s opportunity to obtain private financing. PG, LLC anticipates closing on their financing within six weeks, with construction on the first phase of soccer fields to begin in mid to late summer. Depending on the site excavation and other work on the property itself, the plan is still to have fields ready for soccer by fall of this year.

“The focus at this point is to get this project started,” said City Administrator Cemal Gungor. “We want to jumpstart this project and start seeing some momentum.”

Retail, restaurant and other development that will occur in Gateway Village will be announced at a later date as the developers continue to receive letters of intent from potential business partners.

“I know it’s taken a long time, but we should be proud that we can work together to see this thing happen,” said Cherry. “This is something that is completely different and entirely new, and the developer has a lot of skin in the game, as well as the City, now, to a certain degree. It truly is a public-private partnership, and we’ve taken the necessary steps to make that happen.”

Gungor stated that the 26,000 residents of Grandview remain the city’s priority and that they will ensure that whatever contributions are made to the development will be affordable and include a return on investment.

“The City of Grandview can be proud of a project of this magnitude,” said Jones. “People will begin to see that they’ll have options here that they may not have thought about before. It’s not just about the soccer; this is for the entire metropolitan area and we can all benefit from that.”

Posted by JCAdvocate at 9:47 AM