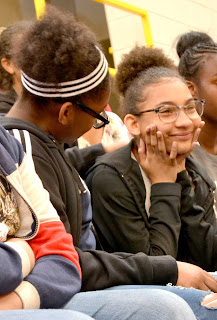 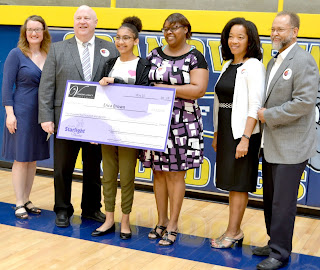 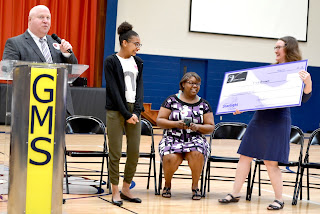 A stunned seventh-grader from Grandview learned last week that her dream of singing and acting professionally are coming true, thanks to Starlight Theatre and the Vincent Legacy Scholarship.

Since 2006, Starlight Theatre in Kansas City has awarded Vincent Legacy Scholarships to qualified and deserving middle school students throughout the metropolitan area. The needs-based scholarship was established with a generous donation from former Starlight board member and longtime supporters Greg and Rebecca Reid. It provides ethnically-diverse youth in Kansas City the opportunity to pursue professional training in the performing arts.

During a special surprise assembly in front of her peers, Erica Brown discovered her hard work had paid off to the tune of a $2,500 scholarship. Brown has been performing since she was a young girl, and has made her mark at Grandview Middle School by not only landing the lead role in Annie, Jr. this year, but also entertaining her fellow students by singing in the cafeteria on Tuesdays.

“Scholarship winners are selected not only because they exhibit passion in the arts, but they also have to be excellent students, have strong school attendance record, and give back to others through community service,” said Richard Baker, President and CEO of Starlight Theatre. “Erica’s level of singing and performing made her a perfect choice for our scholarship.”

According to Assistant Principal Tim Moore, Brown is respected by her teachers because she is an active participant in class and is very involved in many school activities. Moore said Brown will likely achieve much success in her future endeavors. She aspires to one day be an instructor in the arts.

“Thank you all so very much,” said Brown. “I’m really excited, and I just want to thank you.”
To qualify, students in grades 6, 7 and 8 must also be nominated by a current instructor, have strong grades, and audition for Starlight’s scholarship committee.

Each $2,500 Vincent Legacy Scholarship, funded in memory of Greg Reid’s infant son Vincent, is administered by the Starlight Education Department, and funds are applied to the scholarship recipients’ performing arts training during their middle and high school years.