How to respond to an active shooter situation 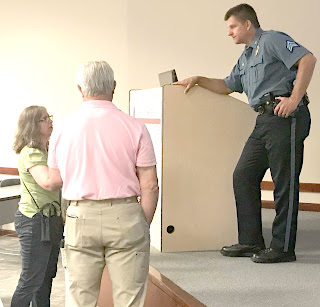 KCPD Sergeant Steve Schramm presented to around 50 participants, focusing on recognizing and protecting oneself from an active shooter situation in the workplace or in other public settings like malls, stores, restaurants and churches. Schramm has worked for KCPD since 1995, and has worked with tactical response teams to train his department on active shooters.

“Six or seven years ago, charter schools in Kansas City reached out to us wanting some type of plan,” said Schramm. “They needed some type of guidance for active shooter response. We put a presentation together that has since evolved three or four times. At this point, I now give this presentation about a half dozen times a week to businesses, schools, and churches, you name it. Anyone that asks for it, we’ll come out and provide at least an hour-long training.”

The department started doing active shooter drills for the charter and public schools to help develop their plan, which is no longer offered to the public. City Hall, the health and water departments, and other Kansas City organizations also receive the shooter drill trainings.

“There are numerous programs out there for active shooter training,” said Schramm. “They’re all pretty much the same. They might be called something different, but I guarantee 90 percent of them are identical with maybe a different twist.”

Schramm said that while most of the time people know what to do for a fire or tornado drill, there has not been formal training for an active shooter situation. He added that each individual has to take ownership when it comes to active shooter training, because if the situation arises, no one will be telling everyone what to do or how to respond.

“You have to know what your options are,” said Schramm. “Our program is 100 percent options-based. At the beginning, schools and businesses used to just strictly have a lockdown. While that is great and very effective, it misses some key elements.”

KCPD focuses on Flee. Fortify. Fight. for their active shooter training. Similar to a lockdown, it provides an option to escape from a threat. The definition of an active shooter, according to Schramm, is an individual actively engaged in killing or attempting to kill people in a confined or populated area; in most cases, active shooters use firearms and there is no pattern or method to their selection of victims. Active shooter situations are unpredictable and evolve quickly.

“These take place in 10 minutes or less, but more often they occur in less than five minutes,” said Schramm. “It can happen in two to three minutes, depending on where you’re at. The trend right now is more open-air environments or venues. There’s a lot of concern with churches, and that’s a valid concern. But the reality of active shooters inside churches is very small.”

About 25 percent of active shooter instances are happening in school environments, according to Schramm. Half are occurring in the business world, including stores and restaurants or businesses that are not open to pedestrian traffic.

The number-one option, according to Schramm, is to flee, or run away from the threat of an active shooter, if possible. If fleeing is not an option, fortifying, or hiding in a safe, secure location where one can barricade oneself is best.

Schramm said that it is important to know where the exits are in every building one enters. Familiarizing oneself inside of a structure can provide for easy and quick exits, which could potentially save lives. In restaurants, specifically, Schramm added that there is always an exit door through the kitchen.

If fleeing or fortifying are not options, Schramm said that the only thing left to do is to fight, or disengage, the threat. Using whatever is available as a weapon or distraction, including chairs, aerosol sprays, or objects that can be thrown, the goal is to stop the active shooter from creating additional harm.

“Suspects will not stop until they are stopped, run out of ammunition, or are faced with direct law enforcement,” said Schramm. “Sometimes they then commit suicide. The most important thing to take from any training you may have is to always be aware of your surroundings, and listen to your intuition. If something is telling you that things aren’t right, get out of the situation and seek help.”

The Kansas City Police Department offers their active shooter training through its Crisis Intervention Team. To find out more information about the training, contact the department at 816-234-5000. St. Joseph Medical Center provides free community education classes regularly. To find out more information, visit stjosephkc.com, or follow the hospital on social media.
Posted by JCAdvocate at 8:57 AM