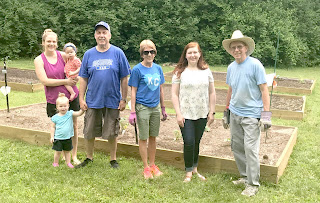 Neighbors in one South Kansas City community are sharing their love of gardening and homegrown nourishment through their collective green thumbs.

Along undeveloped park land in the Terrace Lake Gardens neighborhood, resident Eilene Myers had visions of a way to utilize the unused space and bring neighbors together. The community garden has been established as a way homeowners and residents of Terrace Lake can connect with others in the association through planting.

“Last year, I wanted to do this project,” said Myers. “We had the garden shed in one of the four parks that our association maintains, and just ran out of time to get the garden going then.”

The association learned that, according to city ordinances, the shed on the park ground could not be there unless it was adjacent to a home or an established community garden.

“It was something we already wanted to do, so it worked out really well,” said Myers. “I want it to be something that everyone can get involved in, including renters and everyone who lives over here. I hope that it fosters some ownership of the neighborhood and gets people out and talking to one another.”

Myers, with funding help from the homeowner’s association and a few committed gardeners, rented a truck and purchased the supplies, including two full loads of dirt.

“All of these people came out to help,” said Myers. “Wonderful people showed up with wheelbarrows and shovels, too. I’ve had other people volunteer to come help water and weed throughout the season.”

Homeowners or residents of Terrace Lake Gardens can rent space in the garden on an annual basis. They are then responsible for their plot, tending to it for the season, then winterizing it and keeping it for the next year or releasing the plot for another resident. The garden is still a work in progress, and Myers hopes to expand the available plots as interest in the community grows.

“If it wasn’t for Eilene, we wouldn’t have this,” said resident and community garden volunteer John Dell. “She got the dirt here and unloaded all the boards herself. We had community members out here hauling dirt and helping build who aren’t planting, but just wanted to chip in and help.”

Myers said the response from neighbors in her community has been positive. Any resident of Terrace Lake interested in becoming involved with the community garden can contact Myers by emailing eilenemyers@hotmail.com.