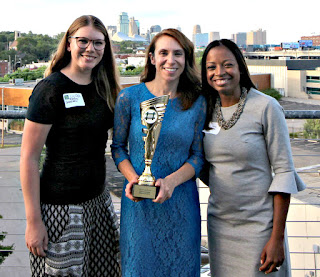 From congratulating state champions to building comradery between neighbors, a new social media campaign in Grandview has gained popularity, and is receiving regional recognition.

We Are Grandview has been seen on Facebook and Twitter (#WeAreGrandview), in newsletters and on mailers, in print and online, and was even used as the theme for the Harry’s Hay Days parade. What began as a strategic marketing campaign to try and put a positive spin on Grandview’s image has become a clear message of change and evolution in the community.

A few years ago, the Grandview C-4 School District began a communication audit, focusing on how the district is perceived in and out of the Grandview community.

“For the district, one of the biggest findings that came out of the audit is that we were missing out on branding,” said Public Relations Coordinator Sheba Clarke. “This was huge and something that we really needed to pay attention to.”

At that time, after a conversation with some City of Grandview staff, Clarke discovered that the city was also thinking of Grandview’s perception and how to change it. Meetings began to take place to figure out how the district and the city could work together to put a brand on Grandview.

“We were learning that the perception was not our reality,” said Clarke, “not necessarily from people in the community, but more from folks outside. We figured that one voice, one message, was stronger than just a school district brand or a city brand. While we all have our own distinction, we all want to push the same message of who we are.”

We Are Grandview was born out of a cheer. Clarke said that during a high school pep rally, varsity cheerleaders chanted “we are Grandview” to help students get excited about an upcoming game.

“It just seemed so prideful,” said Clarke. “That’s what started the hashtag and the We Are Grandview slogan.”

Clarke added that she often hears from people outside of the community who may have a negative view of Grandview based on untrue information. From a city standpoint, one of the biggest challenges that Communications Manager Valarie Poindexter has is surrounding that perception and image.

“This is such a proud community,” said Poindexter. “It’s a beautiful community, but we have to overcome that challenge. I was immediately on-board with this because something has to be done. We have to be able to take back that narrative and we will tell the story.”

The brand provides residents and the community an avenue to express pride in the Grandview community. Clarke said that she has seen the We Are Grandview social media conversation from people all over the country.

“It really touches your heart when you see all of these great things, one after the other, these great stories from Grandview when you search We Are Grandview on social media,” said Poindexter.

The two decided to enter their We Are Grandview campaign in the Social Media Club of Kansas City’s annual AMPS awards, which was established four years ago to recognize outstanding social campaigns from brands, nonprofits, governments and educational institutions in the region. With no budget, no social media campaign software, and with a brand just underway, Poindexter and Clarke weren’t sure they even had a shot for last year’s deadline, and thought they may have more material to enter for their 2018 campaign.

“It has already begun to change the conversation,” said Clarke. “We definitely know that there is still a lot of work to be done, but we’re happy with where it’s going.”

They say their next hurdle is continuing the momentum they have created, and maintaining a positive brand message in the community.

“We Are Grandview makes a statement,” said Clarke. “I’d like it to be a story. When I think of ‘We Are Grandview,’ I think of people like Jane Bryan, who grew up in Grandview, who gives back time and time again on committees, in our schools, taught our kids and still very much involved in who we are. I think of residents like her. I think of the normal, everyday person who truly loves our community and does whatever they can do to give back.”

"We Are Grandview" is a story. It is a collective voice that defines who Grandview is as a community. It puts a face on the people who live, work, and have fun in Grandview. It is redefining what makes Grandview unique, and creating a positive buzz surrounding the community.

“If you come to Grandview, our hope is that you have gotten a good glimpse into who we are by the time you leave,” said Clarke. “That’s what this is all about.”

The We Are Grandview social media campaign was recognized as a gold winner on Tuesday night at the AMPS Awards Ceremony, held at Boulevard Brewery in Kansas City.

Posted by JCAdvocate at 1:39 PM