Grandview names local pastor as Civic Leader of the Year 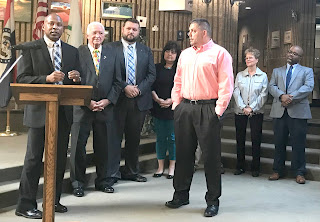 Tom Worstell’s community hats come in many colors, shapes and sizes. He is more than the pastor of Southview Christian Church in Grandview; he serves as a Police Chaplain, volunteers his time with the school district and at community events, and he’s recently been named the City of Grandview’s Civic Leader of the Year.

He grew up in the small Missouri town of Milan, and attended Central College of the Bible in Moberly, with the intention of becoming a youth pastor. After graduating, he landed the job at Southview Christian in Grandview, which has been his church home ever since.

“We’ve been here for over 20 years now,” said Worstell. “Honestly, I’ve not felt like God has called me to go anywhere else yet. I love the people here. I love the community. I don’t know of anywhere else where City Hall, the police and fire department, the parks and the schools and the churches all work together. Everyone wants the best for this city.”

It is that common goal of community betterment that sparked Worstell’s interest in becoming involved in more than just his church. He says that he is blessed to be in a church that not only allows him to be a part of the community, but also encourages and supports him to do so. While he may be the face of the church, he said, it’s the members of Southview Christian who are really doing the work.

“I’ve tried to do some of these same things in other places and in other communities, and it is unique,” said Worstell. “I don’t know where else you’d find what we have here. I love that about Grandview.”

A decade ago, Southview Christian was considering a move out of Grandview, looking at properties in Belton. The church felt like it had hit a point where they were no longer able to build on what they had in Grandview, and so naturally, the community service aspect of the church dropped off significantly.

“We just didn’t do much here for years because we were leaving,” said Worstell. “Then some things changed, we decided we were going to be here, and looking around we thought, ‘if we left, would anyone care or would anyone even notice?’ We knew we had neglected some things. We treated the church like it was a rental home, and this is our ‘home’ home.”

It was then that the church elders, and now Pastor Worstell decided to become more invested in the community, which didn’t happen overnight. He took on the notion that not only is he the pastor of Southview Christian Church, but he’s a pastor of the Grandview community as a whole.

“We had a group of people who said, ‘this is our city,’ and they wanted to be a part of this, too,” he said. “Really things started happening with the revamp of Truman’s Heritage Festival. Once we started going to that and volunteering there, all the connections with other aspects of the city just sort of fell into place.”

Worstell also serves as a chaplain with the Grandview Police Department. He says that the opportunity allows him to see a side of Grandview that he didn’t see before. The chaplains are there to assist officers and fire personnel with whatever they may need assistance with, sometimes being the person who breaks bad news to family or other similar tasks that police may not be trained in handling.

“It helps me see the bigger picture of the city,” said Worstell. “We get to be the light in someone’s darkest day, a lot of times. It’s a way to be a pastor to the city and help in a different way.”

He said it has helped build other connections in the city, with the Pastor’s Alliance being brought back to life between church leaders.

“There’s a lot of overlap, and we see each other a lot,” said Worstell. “We’re in for a penny; we’re in for a pound. Let’s just get involved everywhere.”

Being a chaplain has helped him become a better pastor to his congregation. The police ride-alongs, Worstell said, give him sermon material he wouldn’t otherwise have had.

“After 20 years, it’s just become kind of a natural friendship,” said Worstell. “I spend a lot of time with these people, and when it comes down to it, you are going to help your friends.”

Worstell and his wife, Nikki, have been together for 21 years this fall. Probably his most important job is that of dad to three sons: Thomas, 18, Jonathon, 16, and Timothy, 14; and to his daughter, five-year-old Hope, who was adopted by the family when she was born.

“We had three boys, and honestly, they were super easy. We had it made; it was easy and life was good,” said Worstell. “Then my wife said that she’d always had a dream that we’d have two dark-skinned, curly-haired girls in our family. I thought, ‘why mess this up?’ So, we got a dog.”

Apparently the dog didn’t cut it for Mrs. Worstell, and the family began looking seriously into adoption. After almost a year-and-a-half of not connecting with the right birth mothers, the Worstells received word that a baby girl had been born in Wichita, and if they could get there that night, she would be theirs.

“We were expecting maybe six months of planning time,” said Worstell. “It was literally that fast. Within half an hour, we were driving to Wichita, and we had a baby that night. It was amazing how it all happened.”

The family took out a second mortgage on their house in order to pay for the adoption, but with the help of grants, their church friends and family, the Worstells turned around and paid off the loan in a week.

Worstell was recognized by Grandview Mayor Leonard Jones and the Board of Aldermen on Tuesday, July 24. He received a mayoral proclamation naming him as the City of Grandview’s Civic Leader of the Year.

“I do hereby express the heartfelt appreciation of the citizens of Grandview to Tom on this special occasion,” said Jones. “The Board of Aldermen recognizes Tom as a great ambassador for the city of Grandview, who has given selflessly to this community, sharing his time and talents to contribute to the betterment of the community.”

Posted by JCAdvocate at 3:32 PM No comments: