With sixteen ordinances to get through in one meeting, the Grandview Board of Aldermen had a stacked agenda before them for their regular session on Tuesday, September 25. In just over an hour, all 16 ordinances were approved, but not without opposition on a handful of items from one alderman.

“Each issue I voted no on is the same issue that I voiced concerns and opposition to during all previous work sessions,” said Ward 3 Alderman John Maloney. “Though, knowing that I am in the minority doesn't stop me from voting no on any issue that I have serious concern or opposition to. Our responsibility as aldermen is not to be a rubber stamp, but to make the best decisions for the future of our city. Luckily, the Board usually sees eye-to-eye and we always treat one another with respect, but I believe we can all do a better job saying no and asking for more responsibility and accountability from staff and developers.”

Maloney’s first opposition of the evening had to do with the construction of the city’s newest splash park, which will be located adjacent to The View community center. Grandview citizens approved a no tax increase bond vote in 2014 for the splash park for $2.25 million. The project had been tabled after the original bid came in over budget. Mega Industries will be responsible for construction in the amount not to exceed $1,859,653. The project will include spray features, playground with slides, site furnishings, cameras, and fencing.

“We have a very limited amount of money, and I think we’re doing a very poor investment by putting the Splash Park next to The View,” said Maloney. “I think this is being used as an excuse to raise membership rates at the community center, and we’ll essentially be competing with ourselves because we have a free Splash Park on the other side of the city. This goes against what the parks commission and staff are wanting.”

With Maloney’s no vote, the ordinance still passed 4-1 (Alderman Sandy Kessinger was absent from the meeting). Ward 3 Alderman Jim Crain stated that while the location of the splash park is not preferable to him, he is simply going along with the majority on his yes vote.

Maloney also disagreed with the two ordinances on the agenda that would begin the process of converting Grandview’s I-49 outer roadways to two-way traffic. While both passed 4-1, Maloney said that he was not in favor of the conversion project partnership with the Missouri Department of Transportation and the Missouri Highways and Transportation Commission

“I’ve voted no on the outer roads before,” said Maloney. “Grandview lost a lot of its economic competitiveness years ago, and most of the businesses that have moved out don’t even exist anymore. Everyone wants to blame Grandview’s loss on the outer roads. We just didn’t do a very good job selling ourselves while neighboring communities offered so many incentives to developers and they went elsewhere.”

Finally, Maloney also opposed the petition to establish a Community Improvement District (CID) for the Grandview Village Shopping Center, located on Main Street. The property owners propose to use the CID as an economic redevelopment tool to upgrade the center, demolish a vacant building (former Econo Lube), and build a next-generation Dairy Queen Restaurant (DQ Grill and Chill). It will impose a one percent sales tax upon all retail sales within the CID, all proceeds to be used for the redevelopment project.

“I will not be supporting this tonight,” said Maloney. “I find it very hard to support an owner who has built and maintained this property from start to finish and has allowed it to become in certain array to be considered blighted, and then reward them with a CID. I think that sets a very bad tone for our city, in which all our property owners are allowed to just let their property become in disarray and then ask for a CID.”

Despite 4-1 approval, Ward One Alderman Damon Randolph expressed concern that shop owners and managers didn’t seem to have any knowledge of the CID process for their buildings nor had any communication with the property owners.

“I know several people up there, and from what the current tenants say, they haven’t been told anything,” said Randolph. “They read about all these improvements happening at the center in the Advocate.”

The project attorney said that he was surprised to hear that the tenants were unaware, but will ensure communication happens going forward.

The first of the unanimously-passed ordinances included the construction of the shooting range to be installed next to the Grandview Ball Park, off of Arrington Road. Grandview citizens approved a no tax increase bond vote in 2014 for the shooting range in the amount of $750,000. An additional $250,000 was secured from the Land Water Conservation Fund, along with an additional $12,300 from earned interest on the bond. TRS Range Services, out of Idaho, will be responsible for construction, including handicap parking and walkways, shooters briefing building and storage shed, the range, a target turning system and fencing.

With the project estimated to be completed in the spring of 2019, Grandview Police Chief Charles Iseman said that they plan to offer an education along with the opening to make patrons aware of the expectations and what will and will not be allowed at the public shooting range.

“This is a new adventure for us, so there definitely needs to be an education piece to it,” said Iseman.

Also approved at the meeting were the installation of a new roof at City Hall; a one-year extension to the Metropolitan Area Regional Radio System (MARRS) user agreement for all city radios along with software support for the Response CAD system, Police RMS and other public safety systems; an increase in charges for ambulance services ($900 for residents and $1050 for non-residents), an increase in the first-aid rate to $250 and an increase in the mileage charge to $14 per mile; and an ordinance to begin use of an electronic grant management system with the Federal Railroad Administration for the Blue Ridge Boulevard overpass replacement project. 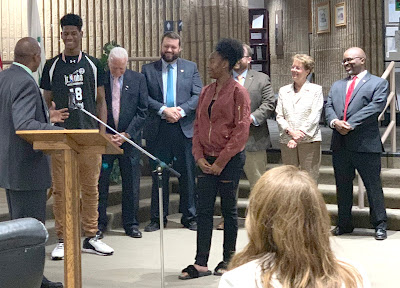 Grandview High School freshmen Taj Manning and Cierra Smith recently competed
on the international level at the first ever Junior NBA World Championships
in August. For their accomplishments, Grandview Mayor Leonard Jones issued a
proclamation during the September 25 Board of Aldermen meeting in recognition
of their outstanding individual efforts, team play, sportsmanship and success in
their sports and academic careers now and in the future.
“On behalf of the Board of Aldermen and the citizens of Grandview, I hereby
congratulate the Central Boys and Girls teams for their Junior NBA World Championship,”