Missouri girl gets a taste of local politics 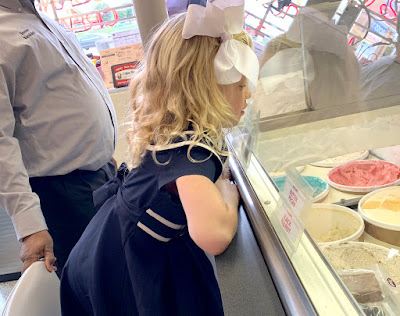 Mayors across the state of Missouri are showing their sweet side as one five-year-old girl invites each of them to meet her for an unforgettable treat. Taylor Duncan, the “almost six-year-old,” as she’d tell you, from Waynesville, is on a mission to meet every mayor in Missouri while learning about each town and enjoying some ice cream along the way.

On Saturday, October 13, Taylor, her mother and younger siblings, visited Grandview Mayor Leonard Jones, her 116th mayoral ice cream visit, to be exact. The idea came about when Taylor, who is homeschooled, was studying the state and learned that the ice cream cone originated in Missouri. So, she set a goal to have an ice cream cone with every mayor in the state.

“It’s a really delicious idea,” she said through a big bite of her rainbow sherbet.

Taylor toured the Truman Farm Home before heading over to Topsy’s with Mayor Jones for their special treat. There, she also met Alderman Damon Randolph, and was excited to ask questions of both elected officials. Randolph, with bubblegum ice cream, and Jones, with his vanilla swirled with fudge and peanuts, answered questions from Taylor like why they decided to get into local politics, the biggest challenges, and what their favorite thing about living in Grandview is.

When asked which mayor has been her favorite so far, Taylor responded, “Mommy asked me to not answer that question.” Her mom said that she’s supposed to answer the question differently than that, but Mayor Jones is convinced that he’s the favorite.

While she couldn’t answer which mayor she likes best, cotton candy ice cream is the flavor she chooses most. She also loves orange sherbet. Following their treats at Topsy’s, Jones, Randolph and the Duncan family headed over to City Hall. There, Taylor was impressed with the size of Grandview’s municipal government building. She also sat at the mayor’s desk and played at Freedom Park.

After Grandview, the family was headed to Oak Grove. Taylor’s trek across the state is documented by her mom on a Facebook page. Follow her journey at Show Me Ice Cream. 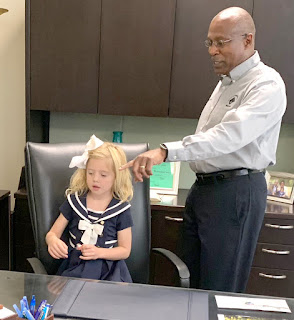 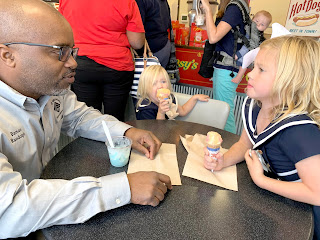 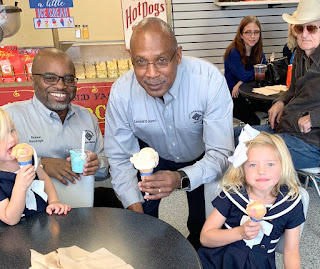 Posted by JCAdvocate at 3:41 PM