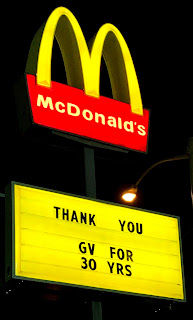 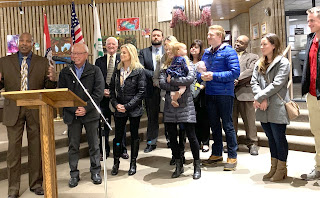 Back in 1988, young entrepreneur Ty Yano opened his first McDonald’s restaurant in Grandview, Missouri, after moving to the area from California. Since that time, Yano has acquired a dozen more restaurants, and has sold a countless number of hamburgers and French fries to the communities surrounding his stores.

Believing in promotion from within, Yano has provided employment and advancement opportunities for his crew. Many began their careers under Yano’s direction, working their way up to management positions in the company.

In recognition of owning and operating the McDonald’s restaurant in Grandview for 30 years, Mayor Leonard Jones and the Board of Aldermen presented Yano with a proclamation during their meeting on Tuesday, November 27. As he was preparing for retirement and more time to enjoy his family, Yano sold each of his restaurants.

“Thirty years have gone by very, very quickly,” said Yano. “I understand this thanking, but I’m the one who should be thanking the city. They accepted me thirty years ago and with that one store, I now have thirteen. It's a blessing.”

“Ty has been very instrumental here in Grandview,” said Jones. “Of the 13 McDonald’s restaurants he owned, Grandview McDonald’s on Blue Ridge was his first. Because of the success of that one, he was able to open up 12 more, which is a blessing by itself.”

Over the last three decades, Yano has been a generous community supporter, with financial donations going toward many area nonprofits including the Grandview Education Foundation and Grandview Assistance Program.  He has provided support for Music on Main and Harry’s Hay Days, to name a few.

“We want to say thank you for all you’ve done and, if you know anything about Ty, you know he’s been very faithful in helping support the community,” said Jones. “Ty has given back to the community over and over again.”

Posted by JCAdvocate at 3:18 PM