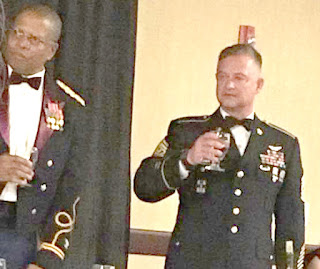 For firefighters, community engagement can come with the territory, but one local fireman is receiving national recognition for his involvement in Grandview. Service is second nature to Grandview Fire Department Engineer Rodney Baldwin, who was recently honored by the 7456th Medical Backfill Battalion Army Unit in Des Moines, Iowa, for his work with the Grandview Assistance Program.

Baldwin also serves as Command Sergeant Major for his Army Reserves unit. On his last tour, he met Dr. Gary Morsch, co-founder of Heart to Heart International, who retired from the US Army Reserves in 2012 and has written a handful of books focused on humanitarian efforts. Morsch gave Baldwin several copies of books he authored and the two got to talking.

“Gary Sinise was doing his USSO show, and I mentioned to Morsch that I’d like to meet him. So, Gary Morsch pulls out his cell phone and calls Gary Sinise,” said Baldwin. “I was like, holy crap, you know Gary Sinise? So, I met Gary Sinise, and I read the book.”

At the time, Richards says, the Grandview Fire Department wasn’t doing much as far as community outreach or service projects. Baldwin began his career as a volunteer paramedic, and wound up working in Grandview because he thought he would see more action here. What started as a way to help his neighbors in the town he grew up in evolved into a career that makes him proud.

Knowing that his friend Morsch was able to make great things happen in his own community with the organization he started, Baldwin knew he wanted to do something here.

Wondering how the rest of his crew felt, he decided to go around and ask his coworkers why they joined the fire department.

“Only one guy said he did it to help the community,” said Baldwin. “I knew we needed to be a part of this community.”

The first thing he did after the deployment where he met Morsch was research Grandview and its people. Seeing a great need for mentorship with students, Baldwin wrote a program, which has since developed into the Lunch Buddies in Grandview elementary schools.

“It was going pretty well, but I then realized that there were a lot of kids that we saw who didn’t have food,” said Baldwin. “I did a little more research, and I found that about 70 percent of students in the Grandview School District are food insecure.”

Wanting to find a way to help the families he serves, Baldwin organized a food drive for the Grandview Assistance Program’s (GAP) Back Snack program in the spring. This led into another drive in the fall for holiday needs.

On December 1, 2018, Grandview Fire Chief Ron Graham traveled to Des Moines to witness Baldwin receive the Military Outstanding Volunteer Service medal, awarded for substantial volunteer service to the local community above and beyond the duties of the United States Armed Forces.

“I was talking with another guy at the ceremony who told me this is something he hardly ever sees awarded,” added Graham. “It was a really, really big deal. I didn’t even realize how big of a deal this was until I got up there.”

Baldwin added that it is an award he’s never seen given before. The impact to the community from Baldwin’s efforts is immeasurable, according to Graham. The number of backpacks filled, hours spent with children, and pounds to food donated can likely be calculated, but the lasting impression on the community is what Baldwin was recognized for.

“It was truly an honor to be there to see it. I was really proud of him,” said Graham. “With these programs, it can be hard to see what an impact you are having, but the guys just continue to go in and hope they’re making a difference.”

Graham said that volunteering on their own time can be a hard sell for his crew members, but once they go and they see that they are needed, they fall in love with it. He added that the community service aspect has become a part of the change in culture in the department, and he thanks Baldwin for his role and leadership to make a positive impact.

Baldwin is gone one weekend a month, or two weeks a year, for the Army Reserves. He works in a medical unit, where they are currently focusing on readiness processes for soldiers heading overseas. Back at home, and after seeing living circumstances in the community he works in, Baldwin has also begun other efforts to help GAP, including a coat drive.

“Giving back makes you feel good,” said Baldwin. “It’s good for our guys to see the good of what we’re doing, and it makes them feel good about themselves, too.”

To help Baldwin and the Grandview Fire Department with future coat or food drives, follow them on Facebook.

Posted by JCAdvocate at 2:50 PM No comments: