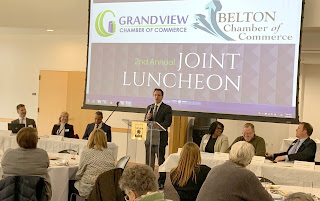 Grandview and Belton Chambers of Commerce have teamed up to provide their members a unique partnership opportunity with businesses in neighboring communities.

On Thursday, February 28, the two chambers met for a joint luncheon, where leaders from both cities shared highlights from the past year and provided insight into what’s to come in 2019. The Belton Chamber of Commerce first kicked off the idea of joining forces in 2018, with plans to meet annually. Representatives from education, economic development, business relations and city management from both Belton and Grandview presented to the chamber members.

“We are really excited of the year that we’ve had thus far,” said Dr. Andrew Underwood, Superintendent of Belton Schools. “We’ve got a great, veteran staff in Belton that is providing top-notch education for our kids.”

Underwood added that with the latest Annual Performance Report for his district being at a 92.9%, Belton continues to aim for 100%. The district is also completing a $32 million construction project at Belton High School, which will provide a 9-12 grade building.

“We’ve not been able to have that in probably the last 15 years,” said Underwood. The project is scheduled for completion in June, with opening by the 2019-20 school year.

Alexa Barton, Belton City Manager, stated that one of the very first things she accomplished upon her new position was to introduce herself to Superintendent Underwood.

Barton added that the district is the City of Belton’s secret gem. The city and the district are working on a collaborative marketing plan to let visitors and interested investors know that Belton is making great strides to improve its image and is open for business. She added that with commercial development, the city is also seeing new subdivisions taking shape.

With the development of Southview Business Park, located just south of Grandview along I-49 and 155th Street, Belton’s jobs will increase by approximately 1,300, and residents will also see some infrastructure improvements. This will include a thoroughfare from 155th Street to 163rd.  Barton said that this was absolutely necessary in order to provide access to the facility.

Grandview Superintendent Dr. Kenny Rodrequez said that his district also works closely with Belton, and that Underwood serves as one of his mentors. He discussed Grandview’s three main priorities for the school year: college readiness, career readiness, and cultural competency.

“We are extremely blessed,” said Rodrequez. “This school district is one of the most amazing places that I’ve ever worked in and I’m certainly very pleased to be the superintendent.”

Rodrequez added that his district has increased ACT scores in the last three years by over a point, and as a whole scored over 90% on the state’s Annual Performance Report. His goal is to provide a path to college or career for every student in the district. The district is also seeking opportunities to work more with the community and further parent involvement.

“It’s almost cliché to say that it takes a village, but it really takes everybody,” said Rodrequez. “Our school districts cannot do this by ourselves. It benefits everybody to work together.”

For the City of Grandview, City Administrator Cemal Gungor talked about the improvements on the I-49 Outer Roads to be changed back to two-way streets, along with the splash pad groundbreaking ceremony taking place this week.

“This is not the Grandview of your mothers and fathers,” added Economic Development Consultant for the City of Grandview Troy Nash. “This is a new city with a dynamic mayor, a dynamic board of aldermen, a city administrator with a lot of energy, and a committed senior leadership team.”

Nash stated that Grandview is included in the state’s opportunity zone, which was selected by the Governor to focus on the most economically deprived and underserved parcels of land. 161 designated opportunity zones were submitted by the governor, and with Grandview being on the list, Nash said that means the city will be able to keep its share of private capital investments made in the city.

Belton will host next year’s joint luncheon with the Grandview Chamber of Commerce. For more information, follow either organization on Facebook.
Posted by JCAdvocate at 11:14 AM