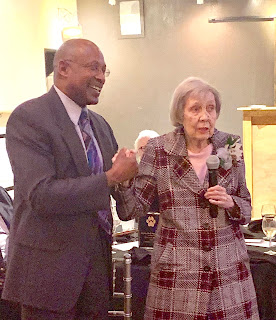 After receiving dozens of nominations spanning the country and the world, the Grandview Education Foundation recognized the first two Grandview High School distinguished alumni award winners during a dinner celebration on Thursday, April 4.

Ina Jane (Billingslea) Bryan, class of 1947, and Leonard Jones, Jr., class of 1973, were honored among friends, family, business associates and peers with a presentation of their awards at The Martin event space in Martin City.

Bryan, who currently volunteers with the education foundation, attended Grandview schools throughout her early education, then after graduating from Central Missouri State University in 1951, she returned home where she was offered a job to teach junior high social studies. Thus, her 40-year teaching career in Grandview schools began. In 1967, Bryan became librarian at Grandview High School, and she remained in that position until her retirement in 1991. She went on to serve on the Grandview Board of Education, the Order of Eastern Star, St. Matthew Presbyterian Church, her sorority alumni club, General Federated Women’s Club, Grandview Retired School Personnel, and her bridge club, just to name a few.

“I want to thank the foundation for recognizing me in this way,” said Bryan “Over the years, I’ve received many awards and been recognized for many things, but receiving this tonight is probably the highlight of my life. I’m grateful to all of those who were foolish enough to go along with this. You have all impacted my life and have made me a better person. I hope that in some small way I have impacted yours.”

Mayor Jones has called Grandview his home for more than four decades. He was first elected to the Grandview Board of Aldermen in April of 1998, and was then appointed Mayor of Grandview on January 21, 2014. He was elected to that same role in April of 2014, and has served in the city’s highest elected office since, splitting his time between his careers at Sprint as a Sourcing Manager and leading the City of Grandview. Jones has actively served on many boards and commissions over the years, including: the Grandview Chamber of Commerce Board of Directors, Little Blue Valley Sewer District Board of Trustees, VFW post 8100 and the ReDiscover Board of Directors. He received the 2015 Distinguished Alumni Award from MCC Longview, and actively participates in municipal organizations such as the Missouri Municipal League and National League of Cities.

The Grandview Education Foundation is planning to make the distinguished alumni awards dinner an annual event. Nominations for future recipients will be accepted by the foundation later this year. Going forward, according to the foundation board, the award will be named the Jane Bryan Distinguished Alumni Award.

“When the GEF Board considered what to name our Distinguished Alumni Award, we didn't have to look farther one of our own members,” said Foundation President Cindy Bastian. “Jane Bryan has been a member of the GEF Board for nearly 20 years, served 6 years on the Grandview Board of Education, taught in Grandview for 40 years, graduated from GHS, and has been a life-long resident of Grandview.  It was an easy decision to name the award the Jane Bryan Distinguished Alumni Award.”
Posted by JCAdvocate at 11:39 AM