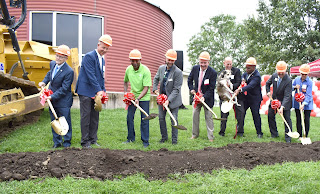 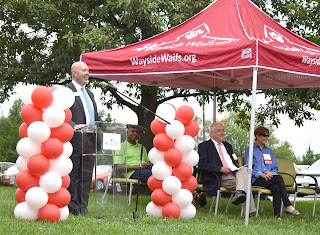 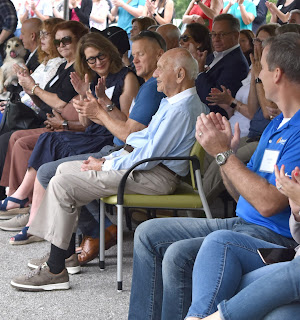 Kansas City’s largest no kill animal shelter is celebrating their 75th anniversary this year in a big way. Wayside Waifs has broken ground on a construction project that will add 20,000 square feet of space to the pet adoption campus.

The $8 million project includes an Education and Training Center for large event hosting, dog training classes, youth education programming, and staff offices; along with a Canine Behavior Center, the second of its kind in the nation, that will exclusively serve shy, fearful and high-energy/arousal shelter dog behavior transformations.

On Thursday, August 22, Wayside Waifs held a groundbreaking ceremony, inviting guests, volunteers, and the community out to their grounds to celebrate the future of the shelter. Wayside Waifs President Geoff Hall said that the organization couldn’t have survived the past 75 years without the partnerships formed over the years, including with animal welfare organizations like Humane Society of Greater Kansas City, KC Pet Project, Great Plains SPCA, and Spay and Neuter Kansas City, as well as local municipalities in the metro.

“We are very, very grateful to be in the wonderful community of Grandview, Missouri,” said Hall. “Grandview is a partner of ours with whom we have been working with to provide animal impoundment services for many, many years, and we work together to solve problems to improve the lives of both people and animals.”

Through the years, Hall said Wayside has continued to grow and improve. The organization is housed on a 50-acre campus, surrounded by nature, with a roughly 50,000 square foot shelter. Homeless animals come to Wayside for various reasons, and last year a total of 5,600 animals were adopted out, with 2019 on pace to reach that number again this year.

Wayside Waifs considers preventative work to be just as important to their organization as the adoption of animals. The team created the No More Bullying program several years ago, and today it is taught in 34 cities in 20 states throughout the country, with the goal of changing the lives of kids to go on to be productive members of society with both animals and people.

Hall said that around three years ago, Wayside’s board of directors gave the executive team a task to begin envisioning what was next for the organization.

“We recognized that there is a dearth of facilities to help both prepare the future of a newly-adopted pet, specifically a dog to have a happy life and a home, as well as dogs that perhaps have had some damaging experiences at the hand of a human being,” said Hall. “These animals traditionally had a very high rate of euthanasia in shelters all throughout the country. We knew that we could do better.”

After investigation of how to handle these types of dogs, a plan was created to help address behavior issues on two ends. The capital campaign that Wayside is launching, and broke ground on last week, is for two buildings. The first will be to replace the current community room that is insufficient for the needs of today, which includes an 8,000-square-foot addition to the campus to house classrooms, dog training space and office space.

There are dogs that come to Wayside who are either shy and fearful or have high arousal and low impulse control and both, according to Hall, can be difficult to live with in a home.

“We also think that these animals deserve a chance,” said Hall. “We recognize that one of our limiting factors, regardless of the size of our facility, is that it is chaotic in the shelter.”

A brand-new K-9 behavior center will be built on the property. The 9,000-square-foot facility will allow Wayside to be able to provide a controlled environment to help those dogs be more calm, focused and resilient to life with people. Wayside Waifs is partnering with the ASPCA, who recently completed a similar facility in North Carolina.

“I’m proud to say that Wayside Waifs and Kansas City will be the second facility of its type in this country,” said Hall.

Partners on the project include A.L. Huber Construction and SFS Architects. Tom and Jill Turner and Dave and Sandy Johnson are leading the fundraising campaign efforts, with $7 million of the $8 million in project costs already secured through private endowments and other efforts. The expansions are expected to take approximately 10 months to complete.
Posted by JCAdvocate at 1:51 PM