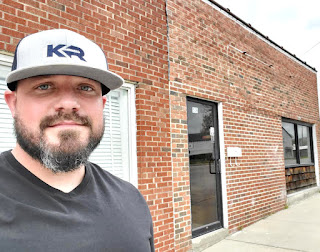 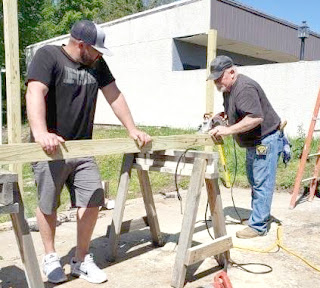 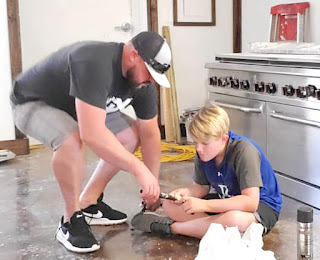 Visitors to Grandview’s historic downtown will soon smell the barbecue in the air. A new catering business is set to open, and the smokers are ready to be lit on the property now home to Any Event Catering at 506 Main Street.

Owner Casey Lueck is busy making finishing touches on the inside of the building, which he says he wanted to look old-school, sort of like a farmhouse. He has completely refinished the interior, including a storefront, a full commercial kitchen and barbecue equipment on the back patio.

“I’ve been in the lumber business my whole life, and I’ve always cooked,” said Lueck. “Since I was doing all of this anyway, I just decided to make money doing it. That’s literally how it got started.”

He purchased his first meat smoker around two decades ago, and fell in love with barbecue. While at work one day, he decided he didn’t want to work for someone else anymore, and put together a plan. Lueck’s parents, Greg and Vicki Lueck, live in Grandview and found the building on Main, which Lueck wasn’t sure would be big enough for what he wanted to do.

While he waits for final approval on certain aspects of the business from the City of Grandview, Lueck has been working to complete minor things that don’t require permits.

Any Event Catering will have a country store at the front, where Lueck will sell homemade barbecue sauces, salsas, beef jerky and an assortment of homemade goods, including breads and desserts. He’ll also sell meat out of the store. After smoking or grilling, all the meat will be available to buy frozen with instructions on how to heat.

“I like to stop into stores like that, and that’s what I wanted to have here,” said Lueck. “It is catering. People won’t be able to come into the store and order a sandwich. But, if they call ahead, the next day I could have whatever it is they need.”

Lueck has a unique catering style, which he refers to as stop-and-drop, where he can serve meals for a small meeting or a large party. He offers to deliver the food, or customers will be able to stop by his shop to pick up their orders.

He also plans to serve food at area events or business locations, like the new winery in Peculiar, where he can showcase his talents and grow his customer base.

His recipes come from his family, and he will continue to cook the food that he grew up with. As a kid, Lueck remembers visiting Wilson’s Meat Market in Grandview, and he said that is similar to the feel that he recalls visiting that shop.

“That was an awesome place, and that’s what I want to be,” said Lueck. “We’ll be so much more than a barbecue catering place. I don’t want to be categorized as strictly catering. Of course, we cater, but I want people to know that we’ll do more.”

A self-proclaimed workaholic, Lueck is anxious to open his doors to the public. He looks forward to the opportunity of working with other businesses in the downtown corridor, where he can help provide food for different events.

“I wanted to be able to go to work every day and have it feel like it’s not work,” said Lueck. “It hasn’t felt like work so far. I’m excited to start cooking. The food is good and the barbecue is good.”

Any Event Catering prides itself on being family-owned and operated. When you walk through the door, you’ll see Lueck, and possibly hear his 12-year-old son, Aiden, playing video games in the back room. He looks forward to being a part of the downtown community and having the locals join his food-loving family.

Posted by JCAdvocate at 1:24 PM