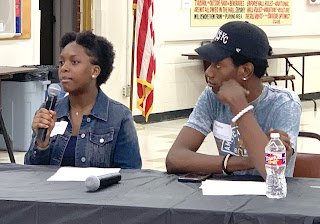 Prior to the back-to-school rally held on Saturday, August 10, residents from Hickman Mills were invited to a panel hosted by the Community and Police Relations team (CPR) in south Kansas City. The team was put together by a group of active members of the community to improve the relationship between the police and young people in the area.

“Earlier this year, only a few months into 2019, there were more homicides reported in Kansas City, Missouri than the beginning of any year for the past nine to ten year,” Verge said as he began the conversation. “There have been at least 126 homicides with at least five (victims) younger than the age of 16. One question I have for my community and its enforcers is what is being done? How can we deplete the statistics and rates of homicides?”

He added that he believes in order for the community to prevail, its members must unify and work together to solve the problem. Mayor Lucas said that he thinks there are two core issues: community and prevention.

“How do we make it so we have a community where people have opportunities and education,” Lucas said, “and things that are different than being involved in crime? We need to make sure we find those who are causing trouble in our community and make sure we address those issues so that there aren’t folks who are creating more threats, more violence for us long-term. The biggest thing that we need to do is prevent these types of things from happening.”

Lucas added that it comes down to having influencers in the lives of young people who believe in them, and tell them that they can be someone greater than they believe they can. He said that he would like to see more investment in alternative activities for young people in the community.

“Things like a youth council for our city,” Lucas said, “so we have folks who not only have activities, but are helping create them. I do recognize that what you and I see as fun on the weekends may be different, and I may be stuck in a 1998 view of fun. I want to make sure that the city, where it can, is invested in those opportunities.”

He said that the schools are the main connector when it comes to implementing new programs and activities for youth.

“There is no better place for us to catch people, to give them ideas, to show them their worth, to tell them how special they are than in the schools,” said Lucas. “That’s one thing that I think we can do.”

Dr. Cargile agreed, and said that as a district, their role in ending the violence in the community starts with education. They have tools in place as educators to teach restorative practices and conflict resolution. She agreed that the community effort starts in the district and in the schools.

“We partner with a resource on conflict resolution to teach our students mediation skills without violence,” said Cargile. “That has been a big initiative in the district for the last few years. We’ve seen a decline in our discipline issues, and we continue to provide training to the staff to provide them the tools to equip our students with the skills that they need to work their issues out without violence.”

Gates said that the police department is very good at gathering data about crime after it occurs, and using the data to be proactive and provide heavier enforcement in areas where necessary. He also added that he recommends community members with firearms secure them inside their homes when not in use in order to prevent them from getting into the wrong hands.

“We see a lot of theft from cars,” said Gates, “where people leave weapons that they own in their vehicle overnight in front of their house. I understand about wanting to be safe and feeling safe with having your own firearm and having access to that legally, but you have to make good decisions. Leaving weapons in your car overnight in front of your house is probably not the best decision.”

He suggested that students who may hear of something or witness something potentially threatening or dangerous speak out and address the issues with the KCPD officers who are in their schools.

“We can’t do this alone,” Gates said.

The TIPS Hotline has increased awards for community tips in order to help motivate individuals with information to contact police anonymously.  Those with information are urged to call 816-474-TIPS.