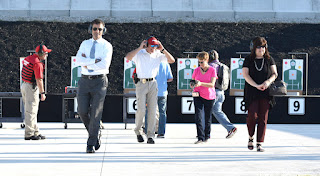 The Grandview Board of Aldermen got the first glimpses of the soon-to-be-open shooting range. The facility will be the first of its kind in the metro, with a mission to become a unique destination for a safe and affordable place for gun owners to shoot outdoors.

On Thursday, September 5, the Aldermen were able to experience first-hand what the range will look and sound like when it opens. A business plan, which includes a partnership between the Grandview Parks and Recreation and the Grandview Police departments, was also recently discussed during a work session. Parks and Rec Director Sue Yerkes said that the process will likely change several times, as they learn how to operate a shooting range.

“Quite frankly, we don’t have any other parks and recreation departments to lean on for this information,” Yerkes said. “We have conservation areas that we have viewed and visited, and we have visited and talked with private entities, but this is a first as far as parks and recreation partnering with a police department for a quasi-public shooting range.”

There are only two other outdoor shooting ranges within a 50-mile radius of Grandview, of which, only one, according to Yerkes, would be viewed as direct competition. The Lake City Shooting Range, located in Independence, offers rifle, pistol, trap and skeet, and archery at $4 per hour.

“We are of the opinion that the project’s recreation market area is a 25-mile radius,” Yerkes said. “We know that we are not going to make a lot of money the first year or two. Our anticipation is to at least break even by year three.”

Building a safe environment and garnering the trust of the public in developing a robust program at the range will be priority. Grandview police will serve as range masters, with Honeywell serving as a second priority for training access behind the police department. The facility has opportunities for rental, concessions, and lane rental fees at $7 per hour.

“We realize that is different than others in the area,” said Yerkes. “This is something different and something special, so we’re okay with charging seven dollars.”

A December 2019 soft opening for the public is anticipated; however, due to grant funding, the shooting range is required to be opened for police department training by Sept. 30. Funding was also provided by Honeywell to help with office space and classroom renovation.