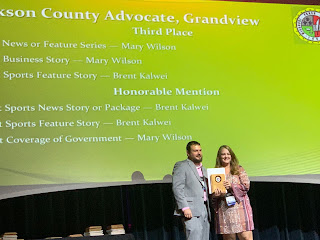 “Of course, we don’t do what we do for the awards,” said Wilson. “But, being recognized for a job well done is always nice and is very much appreciated. I love what I do. I love being able to tell the stories of the community; your stories. I love getting to know the people and places in my hometown, and I love uncovering the nitty gritty when necessary, too.”

The Better Newspaper Awards are part of an annual contest, put on by the Missouri Press Foundation. The Advocate, a member of the Missouri Press Association, has won numerous awards in this statewide contest over the years. Wilson also currently serves on the association’s Board of Directors.