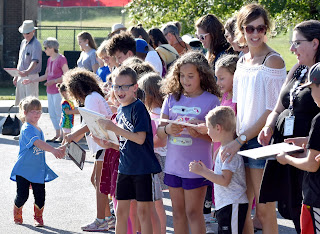 And even though the new Red Bridge Branch of the Mid-Continent Public Library System (MCPL) is located just feet from the old one, moving that collection of books is still a massive undertaking.
The 24 employees at the branch have spent the last month packing those 60,300 books into crates, with books packed tightly so they wouldn’t be damaged in the move. With 130 crates in all, adult fiction totaled 38 crates alone.

Together, they worked more than 1,500 hours to get the job done. And patrons got a chance to see all that hard work September 24, when MCPL opened its new Red Bridge Branch to the public.

Hundreds of visitors lined the street forming a book brigade as employees opened the doors to the now former branch and selected the last of the books from a lonely, last shelf the only thing remaining in the old branch. From little hands to big hands, the books were passed to their new home: A 14,352 square foot modern facility that includes new meeting spaces, a community room and updated technology alongside the previous collection of books.

“We’re so excited to welcome our customers to this incredible new building, which we think will be a tremendous resource for residents of South Kansas City,” said Sherry Bridges, Red Bridge Branch Manager. “The resources and amenities now available at the Library’s Red Bridge Branch better reflect what customers expect and deserve from a 21st century library.”

The new branch is also 2,300 square feet larger and has a new outdoor patio (with WiFi extended outside), lighting designed to mimic natural sunlight, a family restroom and a wellness room, where patrons can have a moment of privacy.

The plan began 14 months ago and included a team of 10 library district employees along with five architects and designers. Renovation began on the new location in January of 2019 – and there’s a purposeful holdover from the previous occupant, a bowling alley: The stairs leading from the reception area down to the main collection are the stairs that once led down to the lanes. Today, the bright, light wood has seating incorporated throughout, creating embankments where customers can relax, kick back and utilize the space for anything from reading a book to using one of the six new laptops and laptop desks.

The former branch opened in 1987, and since then, the services that people need and want have evolved. Other technology upgrades include five new TV monitors and eight public desktop computers.

MCPL Public Relations Coordinator Emily Brown said these new features are the result of public comment. The district reached out to its users through online surveys and public meetings. And the answer was clear: More technology and intentional spaces.

“We really wanted to make sure we are providing the types of things each individual community needs and wants to see,” Brown said. “People use the library a lot differently than they did back then; they actually want to come in and stay, use it as co-working space, study space, and use the Wi-Fi.”

“Serving people through technology is a big part of our services,” she said.

The move to open the new Red Bridge Branch is part of a $113 million capital improvement plan that will upgrade many locations throughout the district. The funding was made possible by increased funding from the passage of Proposition L by voters in 2016. The Red Bridge branch serves an estimated 41,000 customers, with the district serving more than 800,000.

“Every branch will be touched in some way,” Brown said, adding that two new branches, one in Lee’s Summit and one in Independence, will break ground soon.

The library is located at 453 Red Bridge Rd. in the Red Bridge Shopping Center in Kansas City, Missouri. For more information, visit https://www.mymcpl.org/locations/red-bridge.