Scrooged and Marley, with Ebenezer Scrooge and his Service Dog Marley, and the Water Glass Symphony 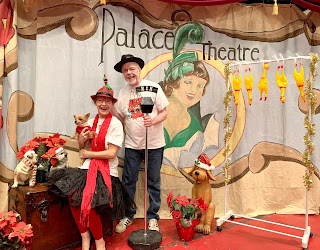 For 35 years, the nonprofit Martin City Melodrama and Vaudeville Company has entertained audiences in Kansas City with their humorous take on show business and theater arts. After a rocky start to the beginning of the 35th season, starting with an actress with health issues and having to rewrite the script, in true theater fashion, Director Jeanne Beechwood determined that the show must go on.

The entire show’s premise was based around this specific actress and her service dog, so when it was determined that she was unable to perform, Beechwood got to work. She tapped an old friend in the business to see if he was available, and Beechwood and local actor Sean Taylor came up with a new show.

“The theater was opening in two weeks. We lost the dog, the girl and the Scrooge,” said Beechwood. “I was like, this is supposed to be our 35th season and it’s not looking so good. My dear friend Sean, who has done a lot of tech work here in town and is foolish enough to help me here when he can, stepped up to help me out.”

In two weeks’ time, the show was rewritten and the main dog was re-casted. While still the same premise, the dog in the show is not an actual service dog like the previous Marley. The traditional water glass symphony that Melodrama fans have come to love at Christmastime was written for four people, so Beechwood had to determine if the cast of two could pull it off.

“By the grace of God, it all came together,” said Beechwood. “The dogs outnumber us in this show.”

Scrooged and Marley features eight rescue dogs alongside the two actors. The show opened two weeks ago, with the premise that everyone dropped out, which works well for Beechwood and Taylor. They are able to play up the fact that they’re pulling off a show with a limited number of people.

“All that’s left is us old-timers,” said Beechwood. “And it works. We made it seem as though we could only put the show on if we used the theater’s rescue dogs.”

Scrooged and Marley and the Water Glass Symphony is playing now through January 1 at the Martin City Melodrama and Vaudeville Co., located at 702 E Blue Ridge Ext. in Grandview. For ticket information, visit martincitymelodrama.org, or call 913-642-7576.
Posted by JCAdvocate at 2:49 PM No comments:

This week, Troy Schulte walked through doors at City Hall in Kansas City for the final time as City Manager. On Friday, November 22, Schulte submitted his resignation letter to the Mayor and City Council.

Having served the last ten years as city manager, Schulte has worked for 21 years for the City of Kansas City. During that time, he is credited for a list of success stories, including: balancing billion-dollar budgets during both a recession and an economic upturn; guiding the creation and implementation of the GO KC 20-year infrastructure repair program; creating an award-winning citywide business plan; expanding the use of data to guide decision-making and to measure results; creating a modern streetcar system that has sparked billions of dollars in economic development; bringing free public WiFi to the downtown business district and along the Prospect Avenue corridor; increasing leadership opportunities for women and minorities; and both the convention center hotel and airport terminal now under construction.

“I thank Troy for his decades of service to our city,” Mayor Quinton Lucas said. “The impact of his work will be felt for generations. I appreciate Troy’s participation in our city manager search process and his dedication to ensuring continuity for our city employees during this transition period. I wish Troy and Laurie the best in this next chapter.”

Schulte previously announced that he would leave city service at the end of his current contract, in February 2020. However, on Monday, November 25, the Jackson County Legislature approved a contract of employment that will allow the County Executive to hire Schulte.

“Troy is an exceptionally talented and hard-working public servant who knows how to get things done,” said Jackson County Executive Frank White, Jr. “When I learned that he might be available, I immediately sat down with him to see if we could find a way to add him to our team.”

“I’m excited about the opportunity to work with Troy,” said Legislative Chairwoman Theresa Galvin. “He brings a wealth of knowledge and experience that is needed. This is a positive step in the right direction and I would like to thank County Executive Frank White, Jr. for working with the Legislature to move the County forward. This process has truly been a collaboration that has been missing for some time and I hope it will continue.”

Prior to serving as city manager, Schulte led the city’s budget office. He received the Department of Economics and Department of History Outstanding Alumni Award last month from Iowa Sate University, where he earned a bachelor’s degree in history and economics in 1992 and 1994, respectively.

“I am grateful to the County Executive, Legislative Chair, and members of the County Legislature for their support,” said Schulte. “While trying to figure out what was next for me, I ultimately decided that I was not ready to give up public service. I love what I do and believe I have more to give. I am excited to join the Jackson County team and look forward to working with everyone to get things done.”

On Monday, December 2, Mayor Lucas appointed Earnest Rouse as acting city manager. Rouse, a 30-year veteran of the City of Kansas City, has worked in a variety of roles and departments within the city’s government. He becomes the third African-American to serve as City Manager in Kansas City’s history.
Posted by JCAdvocate at 8:27 AM No comments: