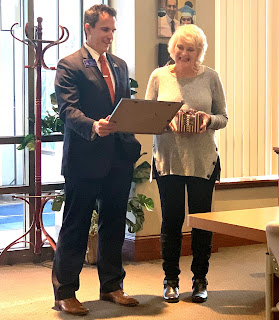 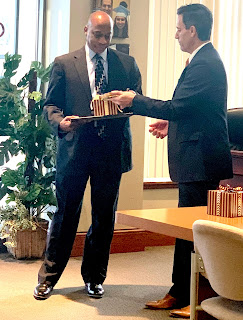 School Board Recognition Month is typically celebrated in February, however, the Grandview School District recognized certain board members for their service during the meeting on Thursday, March 12. Each March, Superintendent Dr. Kenny Rodrequez makes an effort to thank board members as they complete their three-year terms.

Rodrequez also recognized Alexander and Polette, who are retiring from their service on the Board of Education this April. Both received a cupcake and a certificate detailing their specific attributes and qualities brought to the board.

“Paul is a selfless volunteer on behalf of Grandview schools,” said Rodrequez. “He cares about exposing students to engineering careers and has a humble, helpful servant’s heart. He is optimistic, he listens earnestly before taking action, and was an office holder on the board for six of his nine years of service. He is deeply dedicated to his family and community.

“Barbara is a supporter of early childhood education,” added Rodrequez. “She has a heart for kids, and has earned 115 MSBA (Missouri School Board Association) Certified Board Member credits. She has been involved in a lot of things at our state level and continues to be dedicated. Her life has been devoted to helping others, and she achieved Master Board of Education Certification in her first term.”

Their fellow board members indicated that they have been mentors and offered guidance to more rookie elected officials. Board Secretary Kathy Meyers, who is also a former board member, also thanked each for their service.

“I want to thank both of you for dedicating nearly a decade of your lives to board service,” said Meyers. “I especially want to point out, to you, Barbara, that your devotion to continuous learning is rare and impressive. To get your Master Certification in your first term is outstanding, but even more than that, to get 115 MSBA continuing education credits in nine years is a bar I’m not sure will be reached in quite some time.

“And Paul, I want to say I have always appreciated that you always seem to be in the same mood,” added Meyers. “Your calm demeanor is a real benefit to this board. I could almost always count on Paul being at every meeting. For that, you have made my job much easier, and it is a testament to your dedication to this district.”

Meyers said to both Alexander and Polette that they’ll likely miss their board service, and the connections and being in “the know.” Although, she added, they will probably appreciate the free time they’ll have going forward.

“We’ve been around for a while, folks,” said Board President Greene. “I thank you both from the bottom of my heart. We’re like family up here. The one thing I’ve noticed over the years, and I’ve said this before and I’ll continue to say it going forward, everything we’ve done has been about the kids. You two have dedicated your time, money and efforts to ensure that we move forward for our kids.”

As Alexander and Polette step down, new members Don Kessinger and Damon Greene will be sworn in during the April meeting. Vice President Monica Terry will also be sworn in to serve her second term at that time.

Posted by JCAdvocate at 9:22 AM