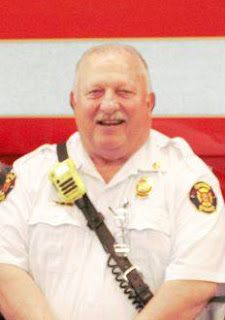 If you have attended any community events in Grandview over the past several years, chances are you’ve met Fire Marshal Lew Austin. With his friendly smile and his Jersey accent, Austin quickly became a pillar of the Grandview Fire Department since he was hired in early 2014. Knowing no strangers, he began work immediately and, though the task would have been a challenge to most, he did it all with a genuine love for his job.

“I’ve been in the fire marshal position, and I’ve now worked with two other fire marshals besides Lew, and I can truly say he is absolutely the best fire marshal I’ve ever been around,” said Grandview Fire Chief Ron Graham. “He is so committed. It’s one thing to be knowledgeable and have skill and know the fire code and things, but when it comes to his commitment and wanting to make sure that builders or businesspeople have the right advice, Lew is the best.”

Graham said that Austin doesn’t “shoot from the hip,” instead offering assistance to business owners to work with them to correct any issues he may come across. He is also known for being willing to come up with a plan to help businesses when it comes to operating within codes.

“A lot of fire marshals aren’t like that,” said Graham. “Lew understands, and it’s not that we’re just such a small town. I think he’d be the same in a big town. That’s just his style, and it’s the correct style.”

When he was hired, Austin had his work cut out for him. Graham said there was a lot to be done to get the department’s program back on track.

“There was kind of an unwritten word out there that Grandview’s not going to check you,” said Graham. “Lew’s changed that. He’s taken some heat on it, but he would just apologize and then work with people and give them some time. Many times, he had to take a deep breath and just say, ‘I’m sorry. Yes, this should have been enforced years ago, but it is a requirement and I’m going to work with you.’ I really respect Lew for that.”

Graham added that Austin has a clear passion for his work. It wasn’t unheard of for him to take work home with him over the weekends, not wanting to hold up any permits or plans.
“Lew always made sure the work got done,” said Graham. “One thing we tease him for is sometimes that New Jersey attitude will come out. And, while we tease him about it, it’s probably what helped make him so successful.”

Several schools in Grandview were not meeting the fire codes, with violations, according to Graham. At no fault to the district, they just simply weren’t informed. Austin inspected all the schools and compiled a long list of fire hazards and other violations.

“It was embarrassing, really, on our part,” said Graham. “It shouldn’t have been like that.”
Knowing that the district would likely be spending quite a bit on some of the upgrades to bring the buildings to code, including a new fire alarm system, Austin helped Superintendent Dr. Kenny Rodrequez come up with a plan to implement the changes over a period of time, rather than having the big expense at once.

From working with the district, Austin saw a need for further collaboration, and developed the Fire Prevention Week poster contest, where students from across the district submitted artwork annually depicting the theme of the year. Winning posters were selected from each building, and those artists received a ride to school on a fire truck and were recognized by the City of Grandview. Austin also serves on the district’s safety committee.

“From the moment that he arrived in Grandview, he had a desire to work with the school system in other ways than just his role as fire marshal,” said Rodrequez. “He has a heart for safety, for education, and for collaboration that will be sorely missed. We are a better and safer community because of the tremendous work that he did.”

“He’s just been the glue to hold everything together,” said Graham. “He took a program that was weak and, dare to say, it’s one of the strongest in the metro area.”

Austin’s last day with the City of Grandview is Friday, April 24. However, his impact and legacy will last long after he retires to Nevada, where he will join his wife who has been working at a hospital there since January.

Austin has laid the groundwork for his predecessor, Rodney Baldwin, who has been training with the fire marshal for the last two years, and was appointed to the position on Friday, April 17.
“It’s going to be a seamless transition,” said Graham. “We will miss Lew, but to his credit, Lew prepared Rodney.”

Graham said that the department, and Baldwin, will continue the work that Austin has started, including the Fire Prevention poster contest. Baldwin is also passionate about serving the community, having started the Lunch Buddies program with the district a few years ago.

“While we have his position filled, we will never replace what Lew brought to Grandview,” said Graham. “We’re going to be okay, thanks to him. He’s going to be missed.”
Posted by JCAdvocate at 4:07 PM