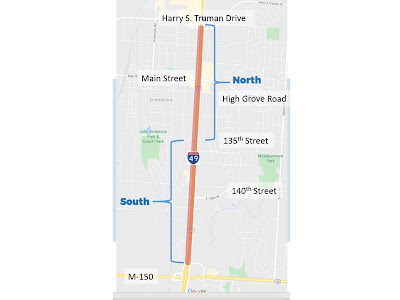 A virtual public meeting was held to discuss the future of the Outer Road conversion project in Grandview, taking the current one-way roads to two-way. On Thursday, May 28, Grandview’s Public Works Director Dennis Randolph, along with designers and contractors for the project, met with community members via Zoom conferencing to garner feedback and answer questions regarding the conversion.

“Folks have been waiting a long time to get to this point, and the year has been strange and getting here has been a bit of a task,” said Randolph.

The project first began in 1980, when the frontage roads along then US-71 were converted to one-way traffic. Randolph stated that the conversion to one-way caused problems for the city, including travel and business economics.

“Customers had a hard time going in circles around and around,” said Randolph. “I wasn’t here, but I know Mayor Jones (and others) have seen what those one-way frontage roads did. For many years, they caused some real economic problems for the city.”

For the last decade of his employment with Grandview, Randolph has been working to develop a plan to convert the roads back to two-way. Around seven years ago, Grandview and the Missouri Department of Transportation (MoDOT) came to an agreement on the scope of the project; however, the City of Grandview had to find the money to complete the job.

“That’s taken quite a bit of work. In the end, we had to come up with about $12 million of funds outside of the city’s coffers with the city contributing about $3 million,” said Randolph. “So, this is a $15 million project that we’re working on.”

The funding now in place, including a large part from federal aid. With those federal dollars, the city is required to follow specific rules. Before authorization is approved for the final design, construction, or purchase of right-of-way, a public meeting needed to be held.

“This is to let you know what the process is,” said Randolph. “We’re hoping that after the meeting is done, and we get all the questions answered and all the documentation together, Missouri Department of Transportation will give us authorization to proceed.”

The project runs from Harry Truman Drive on the northern end to just north of M-150 Highway to the south. Some prior approval had already been granted by MoDOT, and for the last year, Grandview has been completing some property acquisition along the northern end of the project route.

“I think the other special part of this project, besides correcting that economic development problem for the city, is that we’re going to use a process called design-build, which is a project delivery method to get this project done,” said Randolph. “What that really means is, instead of having a separate design done by an engineering design firm and then bidding the project to a construction firm, we’re going to select, based on qualifications, a design-build team.”

The design-build team will consist of a partnership between design engineers, a builder, and other contractors used to complete the project. That selection process has already started, and the city is currently working on narrowing the field from three firms.

The City of Grandview and MoDOT have already completed some preliminary design work for the conversion project. Those plans, according to Randolph, are about 30 percent finished. The rest of the design will be completed by the design-build team, which will be selected later this summer or early fall.

“The two-way traffic will allow folks who live in Grandview to circulate a lot better, and not to have to go out of their way to get from one side of our city to the other,” said Randolph.
If the project goes according to plan, final design for the conversion will be completed in 2021, with construction taking place and being finished by the middle of 2022.

A video of the virtual public meeting is available on the city’s website at www.grandview.org, under Public Works Projects. Public comments for the I-49 Outer Road conversion are being accepted through Friday, June 5. Those interested in providing feedback can email Randolph at drandolph@grandview.org.

Posted by JCAdvocate at 8:53 AM