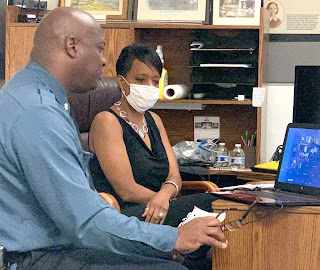 Tracking to be Deadliest Year on Record

Violent crime is on the rise in South Kansas City with the community seeing 13 murders in 2020. Compared to none at this time in 2019, some area activists are asking what local law enforcement is doing and what the community can do to keep their neighborhoods safe.

“I was absolutely floored and shocked and had no idea,” said Johnson-Cosby. “I knew if I was shocked, some of my neighbors and peers were also shocked. So, I thought, let’s find out what’s going on, not only in our community in South Kansas City, but also statewide. I think the trends are the same.”

Johnson-Cosby set out to find information on where the violence is stemming from, who the victims are in these cases, and what steps are being taken as a city to solve the problem. Most importantly, she said, is finding out what the neighborhoods can do to create a positive impact in their communities going forward to help reduce violent crime.

“South Kansas City is not unique in terms of having an increase in violent crime activity including shootings and homicides,” said Mayor Lucas. “It is not a trend that is unique to Kansas City, either, as compared to other American cities. But that doesn’t mean in any way that this is acceptable for us.”

The City of Kansas City received grants from the Department of Justice earlier this year related to community policing. Lucas said the hope is to use those funds to increase policing both with additional officers in the department and to expand the community policing program throughout the city. He indicated that the city is facing budget challenges due to COVID-19.

“In a year where two to three months ago we talked about a $10 million increase in the Kansas City Police Department, now a few months later there’s conversation of a $10 million decrease. So, we’d be very flat,” said Lucas. “The challenge with that, of course, is how do you deliver services to the people of Kansas City? How do we make sure that things like the response times and some of the other community efforts that are very important can continue to be those that we support?”

The mayor also indicated that the inability to have in-person programming due to COVID-19, specifically for teens, has been a challenge. Keeping young people of Kansas City involved and active over the summer to help prevent the congregations in parks and public places has proven to be effective in years past. Swope Park has seen a high number of shootings already this year, and a lot of the other criminal activity has occurred in parks, parking lots and open spaces, according to Lucas.

“We know where the challenge is, but in some ways it’s kind of the idle hands of the youth that has created a challenge for us,” said Lucas.

He added that his office is making sure that efforts are increased with South Patrol to provide for continued collaboration with community organizations, the school districts, and neighborhoods to ensure that safety remains a top priority. He stated that leveraging those programs that already exist in the city, such as the No Violence Alliance (NoVA), and working with those programs is essential.

“Everyone at city hall and on the Board of Police Commissioners is mindful of the real challenges we have,” Lucas said. “Every crime, and every issue, is creating grave concerns for all of us.”

According to Mike Mansur with the Jackson County Prosecutor’s office, Kansas City has seen over 90 homicides since January 1. This puts the city on pace to see around 175 this year. 2017 was considered to be the all-time high with 151 homicides. The prosecutor has recently initiated the Crime Strategy Unit, which is becoming popular throughout the country, and uses police intelligence to help identify crime spots and trends.

“We also will supplement and make better the most important cases with that unit,” said Mansur. “They might be involved in special efforts with evidence in particular cases.”

South Patrol Commander Major Daniel Gates said his team of officers covers roughly 74 square miles in Kansas City with approximately 69,000 residents, and averages around 39,000 calls for service annually in the division. Currently, there are 65 officers assigned to South Patrol of all ranks.

“Just like everyone else, we’ve seen a spike across our division, across our city, and across the country of violent crimes,” said Gates. “Of the 13 homicides in South Patrol, nine have seen arrests or charges.”

Gates said five cases are of unknown reasons, five were either disagreements or arguments involving drug activity, and two were domestic-violence related homicides. One case involved two deaths. In order to help alleviate some of the violent crime issues, Gates meets weekly with South Patrol staff to gather information to ensure they have an understanding about what is occurring and agree on how to approach the situation to prevent further homicides. That information is shared with Kansas City Police Chief Rick Smith and the other patrol divisions in the city.

South Patrol has two community interaction officers dedicated to the area, as well as a social worker assigned to the division. Gates said the division also has an impact squad, which assists with calls for service and works to follow-up with homicide investigations or other cases to help apprehend offenders of violent crimes.

“We do the best that we can,” said Gates. “We protect and serve. We can’t do that without your help.”

Confidentially, the public can provide information about violent or non-violent crime to the TIPS Hotline by calling 816-474-TIPS, or by texting or emailing through their website. The TIPS Hotline is separate from the police departments, and since its inception back in the 1970s, has had a 100-percent success rate with keeping tips anonymous. If tips provided lead to an arrest for a homicide, the tipster can be rewarded up to $25,000.

Sheriff Forte said that his office signed a mental health contract last week to bring the county up to national standards for those who come through the detention facility by providing services to help with crime reduction across Jackson County. Everyone will receive an evaluation upon arrival, and those who are deemed to be in need of special services will be transported out of the jail and taken to proper facilities to receive the care they need.

“This will impact crime all over the city,” said Forte. “We are looking at our entire process as a reform effort, from recruitment to retention to annual psychological profiles. Hold us accountable, from the leaders all the way down through the organization. We need to talk more, and after the talking, we need to have accountability measures to make sure that we change.”

He added that he feels the Jackson County Sheriff’s Office has been dealing with antiquated procedures and equipment. Timing, Forte said, is everything, and with the current climate with police, he said that now is the time for him to find the funding to outfit his patrolmen with body-worn cameras.

“Without trust, though, the cameras don’t mean a whole lot,” Forte said. “We have to build that trust, one relationship at a time.”

“Over the years, I think we’ve checked ‘partnership’ off like it’s a box and we really don’t engage like we should,” said Oakman. “Everyone has responsibility and I think, moving forward, we need to hold everyone responsible for their part in this partnership.”

He said there are two key factors to addressing the homicide problem in Kansas City: enforcement and prevention. While he feels that the police department continues to succeed in the enforcement category, more efforts need to focus on violence prevention.

“We’ve put a lot of programs in place,” said Oakman. “Do we want to have 175 homicides this year and toot our horn because we solved 169 of them? I don’t think that’s progress. I don’t think we should be excited about that. What we should be looking at is doing both (enforcement and prevention).”

Oakman said he would like to see KCPD increase the solvability rate of violent crimes while also reducing the number of homicides.  There are a number of initiatives already in progress; however, due to COVID-19, a lot of those face-to-face programs have been halted this year. He would also like to have school resource officers in each high school.

“We always talk about serve and protect, but sometimes we leave out the engaging with the community part,” said Oakman.

The key thing to remember, according to Oakman, is that those who want to commit violence or destroy neighborhoods are fine doing it if they see only the police engaged or just the community engaged.

Johnson-Cosby expressed to all the speakers that, as community groups, they are engaged and willing to work with the police to help prevent future violent crimes in the southland.