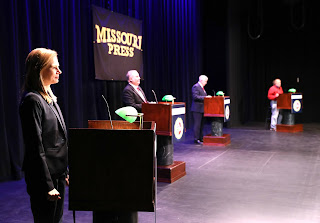 Missouri’s next Governor will be determined by voters on Tuesday, November 3. In order to help with that decision, the Missouri Press Association, in conjunction with newspapers across the state and KOMU-8 in Columbia, held a gubernatorial debate on Friday, October 9.

Originally scheduled for Friday, September 25, the debate was postponed due to Governor Mike Parson’s diagnosis with COVID-19 that week. He, along with his wife, First Lady Teresa Parson, were quarantined after discovering they were positive for the virus. The Governor experienced no symptoms, while the First Lady’s symptoms were mild.

Invited to speak at the debate were Auditor Nicole Galloway (D), Rik Combs (L), Parson (R), and Jerome Bauer (G). Each candidate was provided an opportunity at the beginning and end to offer remarks based on their respective campaign’s platform, while questions were asked by panelists from KOMU, the Columbia Missourian, the Jefferson City News Tribune, and the Washington Missourian. The forum was moderated by David Lieb of The Associated Press.

With Missouri listed in the red zone for COVID-19, the state is among the top 10 nationally for cases. Galloway, the democratic candidate, stated that she feels Missouri needs a reset on the coronavirus response and strategy. She said the four-pillar plan that Parson has laid out is crumbling, and called it a failed test of leadership.

“I have outlined a plan based on data, on containment, on mitigation, on masks,” Galloway said. “Science-backed, data-proven ways to get this virus under control and prevent community spread.”

However, Parson, the republican incumbent, said his response was balanced from day one. His office consulted with leading healthcare experts in Missouri for the COVID-19 response plan, and he says the state is now testing over 125,000 Missourians each week.

“That data that we’ve got from 10 of the most expert infectious disease doctors in Missouri has helped guide our state,” said Parson. “We are on the right track in this state, but we have to do a combination of fighting a virus, fighting the economy, and getting our kids back in school.”

Libertarian Combs said that he would not have agreed to the stay-at-home orders. He also said that deeming workers essential or nonessential is not up to the state government to decide.

“I think it’s not the government’s position and I don’t think that the government has the authority to make people stay home,” said Combs. “I think what we could do is open the state up fully, and I believe that herd immunity would take control.”

Bauer, the Green party candidate, stressed the importance of mask-wearing in Missouri to help prevent the spread of COVID-19. He said that it is important for him to wear the mask when out in public in order to set a good example.

“Let’s have a mask mandate,” Bauer said. “We can’t enforce a law if people don’t voluntarily follow it.”

The impact of COVID-19 has created an economic downturn across the state. Bauer said that, if elected, he would instill a universal basic income for all citizens, and will look beyond Medicaid expansion efforts, to help combat the dwindling economy in Missouri.

Galloway said that state and local budgets are hurting due to the economic impact of COVID-19. She said her plan is to take action to contain the spread of the virus in order to jumpstart the economy again.

“We’ve seen an increase in jobless claims even this week,” Galloway said. “We’re continuing to slide backwards. We also have hundreds of millions of dollars of CARES Act money that is just stuck at the state. As Governor, I would be much more engaged in deploying these resources to help our local communities.”

As a Libertarian, Combs is a proponent of free enterprise, and he feels there is currently an over-reliance on government to control and run the lives of the citizens. He said he puts his trust and faith in Missouri businesses and people to overturn the economy for the better.

“I think the free enterprise system needs to be unleashed,” said Combs. “We need fewer regulations, fewer rules. We need to get the government out of healthcare and other aspects of the economy as much as possible.”

Parson said that Missouri is 12th in the country for getting people back to work. He added that Chewy Pet Food just opened a facility in Belton, creating 1,200 new jobs in the state. That, along with other new businesses, he says are part of his balanced approach to mitigating the virus and stimulating the economy.

Missouri as a whole has seen a surge in crime, especially in the state’s more urban areas. Governor Parson called a special session devoted specifically to addressing the violent crime across the state. The question was asked of the candidates if they would propose anything additional to help combat crime, and whether or not the special session was effective.

Parson touted his 22 years in law enforcement, saying that he doesn’t believe there has been another Governor to take more interest in the issue of crime in the state. He said that he has helped to obtain a grant to combat crime, and is working hand-in-hand with metro police on both sides of the state.

“(We need) to meet people in the streets; boots on the ground,” said Parson. “We need more police officers. We need to be able to do that to fight violent crime. We need to partner with the federal, the state and the locals, which is exactly what we’ve done.”

He added that the number-one issue seen across the state from mayors dealing with violent crime in their cities has been the establishment of a witness protection program, which was the reason for his special session. However, Combs doesn’t agree that Parson had the right idea with calling the special session.

“I don’t think our emphasis is in the right place,” said Combs. “Our emphasis needs to be on drugs and gangs. I think that’s a big part of what we’re seeing in our metro areas. What I would like to do is get together a big task force involving federal agents, and for the state police and locals to go in and start working on some of these gang issues and some of these drug cartel trafficking routes.”

Bauer said he would like to see a different approach that doesn’t involve over-policing the communities, which he feels exacerbates the issue. Galloway said that as a mom, she feels that nothing is more important than the safety of the state’s communities.

“I have introduced a comprehensive plan to get to the root causes of crime,” said Galloway. “I stand with 90 percent of Missourians who want to see some common-sense gun safety rules like background checks. Violent crime has been rising for years under Governor Parson’s watch, and last year as communities were begging for action, he called a special session to give tax breaks for used car and boat trade-ins.

“When we needed him to step up to the plate,” she added, “he didn’t hit a homerun, he struck out. The witness protection fund doesn’t even have funding.”

Parson disagreed with Galloway’s assessment on the special session, however, saying that the state gave the police departments the protections they needed to fight crime.

Ultimately, the voters in Missouri will decide on the state’s next Governor on Tuesday, November 3.
Posted by JCAdvocate at 12:45 PM