The Show Must Go On: GHS Theatre Goes Virtual 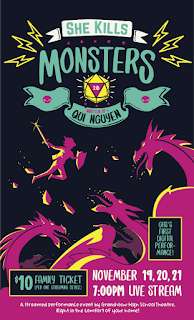 Originally a stage performance, Mokler saw the show at the 2018 Missouri Thespian Conference and fell in love with the production.

“It’s super girl power and feminist,” said Mokler. “It has all these amazing fighting scenes and is based off of the game, Dungeons and Dragons, which I play.”

Back in the spring of 2020, at the beginning of COVID-19 quarantine, all shows shut down. Mokler said that, for high schoolers in particular who had been preparing for shows, it was a real bummer. The author of She Kills Monsters, Qui Nguyen, decided at that time to rewrite his script for a Zoom production.

“He turned his script around really fast, and the first virtual performance of his show was on May 7 of this year,” said Mokler. “I had heard through the theatre community that he was one of the first to really put a virtual script out there. When I watched it, while it wasn’t as amazing as the in-person version, it was something.”

Mokler didn’t decide on this script right away, as there were too many unknown factors to consider: whether Grandview schools would be in-person or virtual, or what the district would allow her to do as far as a show goes.

“I kind of had to wait around for the school to make some decisions, but I decided pretty early on that I wanted to do a fully-virtual show,” said Mokler. “I didn’t want to risk having students put their heart and soul into something that could get canceled.”

She read many different virtual shows looking for the right fit. She initially was looking at other productions because two other schools in the area were already committed to doing She Kills Monsters. However, those schools were planning an in-person show. She circled back to the digital script for the show, and it occurred to her that some of the scenes could be animated.

“That would really amp up the production value; and it would be a cool opportunity for our students to do voice-over work for their characters,” said Mokler. “And, it could really get more students involved because we could pull in the art department.”

She contacted a friend who does animation, and when he signed on to help, she knew this was her show. Her students, she says, are excited that they get to do theatre at all, thinking that the season would likely be canceled.

“The kids were super on board with the very unique way we were going to go about filming this,” said Mokler. “They have adapted overall very well, and I think they’re really proud of it. They’re going to just be thrilled with the final product.”

She has three students who worked on the art and the animation who sought Mokler out to be a part of the show. Trying to stick to a familiar process for her students, Mokler worked to make the show theatrical when possible. Auditions were all online, and the students had three weeks of rehearsal before anything was recorded. They also worked on filming etiquette, like how to make their Zoom frames look theatrical.

“We spent, I think, two full days of figuring out where in the students’ bedrooms would be the best lighting, the best angles and backgrounds,” said Mokler. “Where we could, we used natural light, but we also ended up buying several ring lights for those who didn’t have good lighting in their rooms.”

One scene was recorded using a green screen. A select group of students were allowed into the school to film the scene. Costuming was also a different experience, she said, because the students weren’t able to come in for fittings all at once. When in person, costuming isn’t a big deal, she said, but because of COVID-19, it was more difficult.

“We hired this costumer who created some amazing costumes, but it was such a challenge because we couldn’t have the kids come up to the school,” said Mokler. “I had to drive around to their homes and measure them in their driveway to get appropriate measurements for our costumer.”

Students also had to learn how to apply their own makeup for the show. Filming wrapped up last week, and the animation is being produced now.

“The kids will get to see themselves perform; and in a lot of cases, for the very first time,” said Mokler. “Very few shows allow you to record anything. Before the pandemic, it was very rare that you would even get the rights to film any portion of a show. The students will have the opportunity to celebrate their work with their families. The other cool part of this is that nobody has to travel.

“It’s going to be a truly amazing production,” said Mokler. “We’ve certainly never done anything like this, especially at a high school level. We’ve done something incredibly creative here, and their talents really shine.”

She Kills Monsters: Virtual Realms will be available through streaming tickets on November 19, 20 and 21, beginning at 7:00 p.m. Tickets are $10 per one streaming device, and are only available online at showtix4u.com/event-details/41812.

Posted by JCAdvocate at 9:51 AM