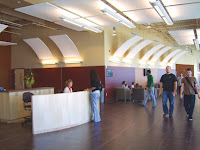 For the first time in years, cars filled nearly the entire parking lot of the former on Monday.
But the drivers weren’t there to shop. They were there to learn.
Over the past six months, the shopping center has been converted into International House of Prayer (IHOP-KC) University, complete with nine state-of-the-art classrooms, a library, video studio, administration center, and community relations office.
Higher Grounds Coffee Shop will be ready to be opened to the public within the next few weeks, and a recording studio is also in the works at the site.
“It’s exciting to see life be brought back into this area,” said Doug Conder, the Vice-President of Administration for IHOP-U. “And with more than 600 students attending class here,  there will definitely be a lot of life.”
IHOP-KC invested more than $6 million at the site to convert the abandoned grocery store and former Carpet Corner into their educational facility for the Forerunner School of Ministry, and Forerunner Media Institute.
Jeff Westergard, IHOP-KC Senior Project Manager, said that the University and related renovation amounts to 65% of the 98,000 square feet in the plaza.
Some businesses remain in the center, including Burger King, Firestone, Styles Unlimited, Wilson Insurance and Edward Jones.
But will having a non-profit group in a former shopping center be good for ?
“It’s wise for people to remember that this building had a low occupancy rate, which wasn’t generating a lot of tax revenue,” said Grandview Economic Development Director Alan Kenyon. “The purchasing power that  hundreds of students will have on our city should be significant.”
Conder thanked the City of for working to help make the redevelopement of the center a smooth one.
“We hope to begin phase two exterior facade renovation this fall,” Westergard said.
Posted by Jackson County Advocate at 3:17 PM