A Community in Ruins 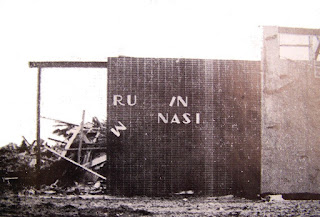 What likely began as an ordinary evening on May 20 back in 1957 quickly turned deadly as an F-5 tornado tore a 71-mile path of destruction, beginning in Spring Hill, KS, and bouncing through Ottawa, KS, Grandview, Hickman Mills, Martin City, Knob Town and Ruskin Heights.

May 20th marked the 60-year anniversary of the tornado that thrashed through the area. Ruskin High School suffered extensive damage, including the almost complete destruction of the gymnasium that was supposed to house the high school’s graduation ceremony the very next evening. All that remained on the sign for the gym was a few haunting letters: RU IN.

The 1957 tornado, deemed the Ruskin Heights Tornado, took the lives of 39 people, with more than 500 injured. Roughly 400 homes were damaged or destroyed.

In the last few years, survivors, many of whom were young children at the time, have found solace and comfort through a social media group created on Facebook. With 673 members, “1957 Ruskin Heights Tornado Survivors CAUGHT EVER AFTER” is dedicated to providing an outlet for shared memories and a bond that has lasted a lifetime.

Dave May, who would later graduate from Ruskin High School, recalled that the horrific night brought the community closer.

“As I sit in the comfort of my living room, I can't help but think about the tornado tragedy that happened in my childhood stomping grounds 60 years ago tonight, and the lives it took and changed and the people that were scarred for life,” May said in the Facebook group over the weekend. “I wasn't in the tornado, but lived in Ruskin then, and growing up I have heard many stories that were tragic and some that were a miracle. My heart truly goes out to the victims who suffered along the 71 miles the tornado was on the ground. After the tornado, it seemed to make Ruskin a little tighter, and neighbors knew neighbors.”

Diana Leonard’s family home sat just south of the tornado path, and while her family didn’t see extensive destruction to their property, the storm left a lasting impact on their lives.

“I was not quite six years old in 1957, and I well recall the events of that day,” said Leonard. “Our home was on the east side of the Kansas City Southern railroad and south of Ruskin, and was okay, other than a 2x4 stuck in our roof like a birthday candle, and the horrible debris scattered across our yard. 20 years later, my younger sister was set to graduate from Ruskin on May 20. We shared our girlhood room the night before and she was up and down all night and nervous as a cat. She said she had heard these things happen on a 20-year cycle and she was sure we were going to have another tornado. I tried to reassure her that we would be fine, but, wouldn't you know it, the early afternoon of May 20, 1977, a straight-line wind came through and toppled our dear old elm tree in the front yard, landing it squarely on top of my car! That will teach me to laugh at old wives' tales!”

Ellen Robinson, then a newly-advanced kindergartner from Tower School, took to the Facebook group to express her gratitude to other survivors of the Ruskin Heights Tornado.

“I graduated from the Tower School kindergarten 60 years ago today, and by that night it was obliterated into dust, leaving no trace,” said Robinson. “I'm friends with a few survivors, and I feel an unspoken kinship with them unlike any other of my friends. I'm grateful for them every day, and very thankful for this Facebook group, because I know there's a wound hidden in each of us. You think all trace of its trauma is gone, then there will be a particular chartreuse or pink in the sky, a scent of earth or electricity in the air, a news story, and instantly you hurt again.”

The memories from the Ruskin Heights Tornado of 1957 are everlasting, with the impact and the loss much greater than homes being destroyed. Loved ones were lost and the lives of the survivors were forever changed. Each year, the anniversary of the tornado is commemorated with the laying of wreaths at the site of the memorial in front of Ruskin High School. For 60 years, the Ruskin community has mourned the ruin and the devastation, but despite the tornado’s impact, the survivors continue to share their stories with each other and with the next generations.
Posted by JCAdvocate at 3:02 PM