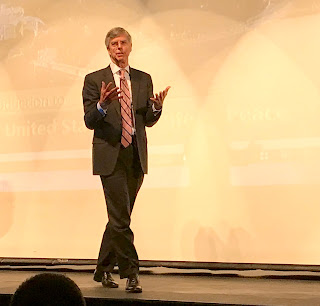 Students in Amy Cameron’s class at Grandview High School are getting a lesson in peace this school year. The United States Institute of Peace (USIP) selected Grandview teacher Amy Cameron to serve in the 2017 Peace Teachers Program. The Peace Teachers Program is rooted in the conviction that educators can be pivotal in bringing peace themes into their classrooms, schools and communities. At a time when violent conflict regularly dominates headlines, USIP believes that teachers are the key to helping young people obtain the knowledge, skills and perspectives to envision a more peaceful world and their part in creating it.

Recently, USIP’s executive vice president, Ambassador William B. Taylor, visited Grandview High School and met with Cameron and her students. Before working for USIP, Taylor was the special coordinator for Middle East Transitions in the U.S. State Department.  He oversaw assistance and support to Egypt, Tunisia, Libya and Syria.  He served as the U.S. ambassador to Ukraine from 2006 to 2009.

He also served as the U.S. government's representative to the Mideast Quartet, which facilitated the Israeli disengagement from Gaza and parts of the West Bank.  He served in Baghdad as the first director of the Iraq Reconstruction Management Office from 2004 to 2005, and in Kabul as coordinator of international and U.S. assistance to Afghanistan from 2002 to 2003.  Ambassador Taylor was also coordinator of U.S. assistance to the former Soviet Union and Eastern Europe. He earlier served on the staff of Senator Bill Bradley.

“I am so impressed with your school,” said Taylor. “As part of USIP’s role, we identify and look for ways to reduce conflicts around the globe. We also have a team that works in schools and educators in the United States and around the world.”

Cameron’s senior students were provided the opportunity to ask Ambassador Taylor questions ranging from how he became the Ambassador to how conflict can be resolved. Cameron wrote curriculum for her high school British and World Literature students using the book What Is the What, written by Dave Eggers, which is based on the life of Valentino Achak Deng, a Sudanese child refugee who immigrated to the United States under the Lost Boys of Sudan program. Last school year, after the students read the novel, Cameron invited a Lost Boy from Sudan to come and speak with her classes.

As part of the Peace Teachers Program, Cameron has received a number of resources to help her incorporate peace building into her everyday teaching. The other teachers selected for this year are from Montana, Florida and Oklahoma, and the four speak monthly to discuss what may or may not be working in their respective communities.

“Part of this is to show that peace and conflict can be incorporated into anything you teach,” said Megan Chabalowski, USIP’s Interim Director of Public Education. “It isn’t subject-based. Whether you teach math, Spanish, literature or social studies, there are ways to teach through a peace-building lens. The teachers that we choose can then serve as models to show what this could look like.”

Cameron will help develop strategies for other teachers to use to incorporate peace into their lessons. She has also written a reflection article that will be published on USIP’s website.

“We look for teachers who are passionate and go above and beyond for their students, which Amy obviously does,” said Chabalowski. “The idea of taking students and helping them to think outside of themselves and do something for their community is really important. When we talk about being a peace builder, that’s what it’s about. It’s about being responsible for creating a culture of peace in your school, your community and the world.”

Cameron will focus on bringing conflicts from around the world into the world of her students and find ways to relate them to the issues kids in Grandview are facing. Each day, her students will be asked how they can be effective peace builders in their school and community. For each individual student, the idea of peace can look very different.

“It could mean no more child abuse; that there is clean water; that we don’t mistreat animals. They all have different ideas of what peace should be,” said Cameron. “At the beginning of this, some of my kids were rather hopeless. A lot of them have said that conflict is just going to exist and there is nothing they can do.”

Cameron believes that her students are the ones who can make a difference, and it is up to them to instill peace and find conflict resolution. Every day, as she teaches World Literature, she explains to her students different perspectives and that the world is much bigger than the community they live in. Her classes will begin reading What Is the What in February.
Posted by JCAdvocate at 12:51 PM